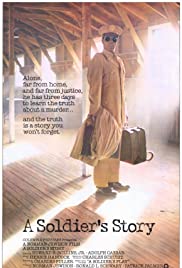 In the towm of Tynen, Louisiana, a black Master Sergeant is found shot to death just outside the local Army Base. A military lawyer, also a black man, is sent from Washington to conduct an investigation. Facing an uncooperative chain of command and fearful black troops, Captain Davenport must battle with deceipt and prejudice in order to find out exactly who really did kill Sergeant Waters.