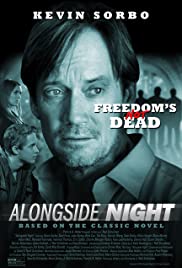 Alongside Night is the story of the final economic collapse of the United States as seen through the eyes of 16-year-old Elliot Vreeland, searching for his missing Nobel-laureate-economist father, and the mysterious teenage “Lorimer” whom Elliot meets in a black-market underground, whose own father might be the reason Elliot’s father is missing.