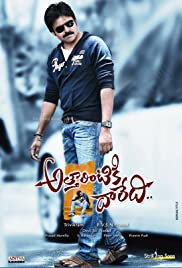 Raghunandan is a billionaire and a big business Magnet based in Milan of Italy. He however is unhappy and wishes to reconcile with his estranged daughter Sunanda whom he sent out of his home because she married a Pleader Rajasekhar against his wishes. His grandson Gautham Nanda promises Raghunandan that he would bring his Atha to their home on his Birthday. Sunanda has 2 Daughters Prameela and Sashi. Gautham enters the house as Siddhu, a driver who was appointed after saving Rajasekhar from a Heart stroke. Gautham woos Prameela but his game ends after he comes to know that Prameela is already in love. Sashi turns rival to Gautham and is suspicious of him and Paddu his friend and male nurse appointed to take care of Rajasekhar.