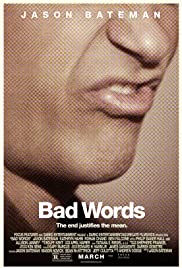 A misanthropic man sets out to exact revenge on his estranged father, by finding a loophole and attempting to win the National Spelling Bee as an adult. Figuring it would destroy his father, and everything he’s worked so hard for as head of the Spelling Bee Championship Organization, Guy Trilby (Jason Bateman) eventually discovers winning isn’t necessary for revenge, and that friendship is a blessing not a curse.