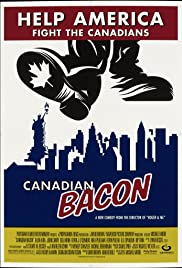 Canadian Bacon is the only fictitious film from Director Michael Moore. This comedy is about an American president who decides to go to war to bring the publicā€™s opinion of him up during election time. Canadian Bacon is actor John Candyā€™s last film.