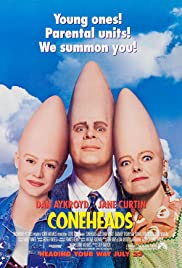 With enormous cone-shaped heads, robotlike walks and an appetite for toilet paper, aliens Beldar and Prymatt don’t exactly blend in with the population of Paramus, N.J. But for some reason, everyone believes them when they say they’re from France! As the odd “Saturday Night Live” characters settle into middle-class life in this feature-length comedy, a neighbor admires their daughter.