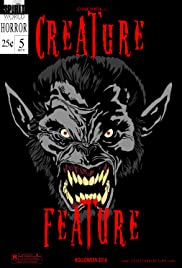 Creature Feature is five interwoven tales of terror that occur one foggy Halloween night in Georgia. A babysitter learns a new appreciation for fine art and hard lesson about the consequences of being irresponsible…and naughty!; a group of college kids stumble on the mother of all Scarecrows; two teenagers are forced to steal from the wrong cantankerous old hermit who has been known to occasionally howl at the moon; a murdered father comes back for vengeance against his gold-digging wife and traitorous children; and all of this Halloween fun is made possible by a London Gentleman known as…”Jack”