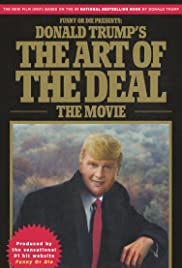 Donald Trump has it all. Money, power, respect, and an Eastern European bride. But all his success didn’t come for nothing. First, he inherited millions of dollars from his rich father, then he grabbed New York City by the balls. Now you can learn the art of negotiation, real estate, and high-quality brass.

Watch Donald Trump’s The Art of the Deal: The Movie