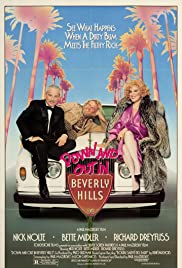 Beverly Hills couple Barbara and Dave Whiteman are very rich but not happy Dave is a hard working business man, his wife is only interested in yoga, aerobics and other meditation classes, and he sleeps with the house maid. Their teenage son is confused about his sexuality and their daughter is suffering from eating disorders. While they are celebrating thanksgiving having plenty of food, street tramp Jerry is hungry, homeless, sleeping rough and has lost his dog. Jerry decides to end his life by drowning himself in their swimming pool. Dave rescues him and invites him to stay for a while. How does this stranger change the life style of this family?

Watch Down and Out in Beverly Hills