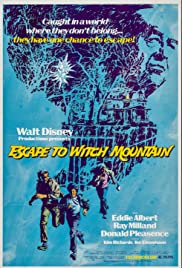 Tia and Tony are two orphaned youngsters with extraordinary powers. Lucas Deranian poses as their uncle in order to get the kids into the clutches of Deranian’s megalomaniacal boss, evil millionaire Aristotle Bolt, who wants to exploit them. Jason, a cynical widower, helps Tia and Tony escape to witch mountain, while at the same time Tia and Tony help Jason escape the pain of the loss of his wife.