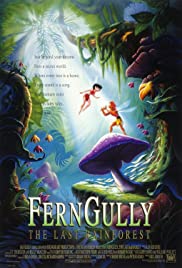 When a sprite named Crysta shrinks a human boy, Zak, down to her size, he vows to help the magical fairy folk stop a greedy logging company from destroying their home, the pristine rainforest known as FernGully. Zak and his new friends fight to defend FernGully from lumberjacks — and the vengeful spirit they accidentally unleash after chopping down a magic tree.