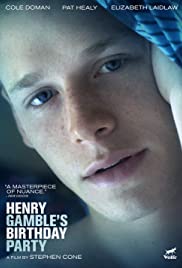 Henry Gamble’s Birthday Party takes place over 24 hours at the birthday pool party of 17-year-old preacher’s kid Henry Gamble. The party guests include adults and teenagers from his church, as well as Henry’s “secular” friends, including the closeted young Logan, who has eyes for Henry.