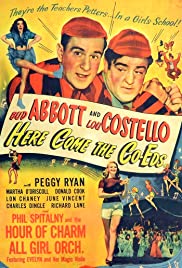 Molly (Martha O’Driscoll), her brother, Slats (Abbott), and his pal, Oliver (Costello), are taxi dancers at the Miramar Ballroom. As a publicity stunt, Slats plants an article about Molly claiming her ambition is to earn enough money to attend staid, all-girl Bixby College. Bixby’s progressive dean offers Molly a scholarship. Molly accepts on the condition that Slats and Oliver come along too as campus caretakers. But the pompous Chairman threatens to foreclose on the school’s mortgage if Molly isn’t expelled. Together, the trio, with the help of some new friends, concocts a scheme to raise enough money to save the school. The plan involves a bet on the Bixby basketball team, which is playing in a game rated at 20 to 1 by the local bookie. But the bookie has other plans for their dough and hires a group of ringers to step in for the opponents. All is not lost, at least while Oliver has the chance to turn things around for his friends-one way or another.