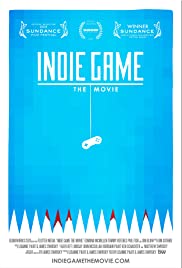 Indie Game: The Movie is a feature documentary about video games, their creators and the craft. The film follows the dramatic journeys of video game developers as they create and release their games to the world. The film tells the emotional story of friends Edmund McMillen & Tommy Refenes, as they craft their first Xbox game: “Super Meat Boy”. It follows Phil Fish, the creator of the highly-anticipated game: “FEZ”. After 4 years of working in near solitude, Phil reveals his opus to the public for the first time. And, the film tells the surprising story of one of the highest-rated video games of all time:”Braid”. The film is about making video games, but at its core, it’s about the creative process, and exposing yourself through your work. In short: Making fun and games is anything but fun and games.