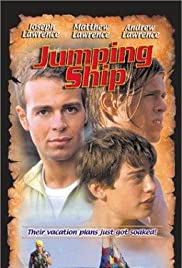 Joseph, Matthew and Andrew Lawrence (TV’s Brotherly Love) star in this thrilling, action-packed sequel to the Disney Channel Original Movie Horse Sense. It’s first-class adventure on the high seas for Michael Woods (Joseph Lawrence) and his cousin (Andrew Lawrence) when they charter a private yacht for a fun-filled cruise off the coast of Australia. But the yacht turns out to be a broken-down fishing boat complete with rusting hull! When they find themselves being chased by modern-day pirates, they decide that Jumping Ship with the boat’s captain Jake Hunter (Matthew Lawrence) is the only option. Stranded on a desert island without any conveniences from home, these three castaways must work together as a team if they hope to survive and be rescued.