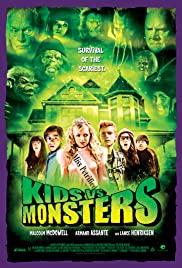 The six richest people in the world each have one thing still dragging them down.. their intolerable kids. Luckily, there is a mysterious entity that is happy to help. See, he has some monsters of his own and they are just dying to test out their skills.. One house. Six kids. Seven monsters. Who will be left standing? It’s time for a showdown.. it’s Kids Vs Monsters!