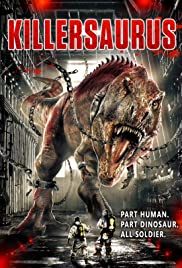 When a scientist runs short of funding for his life-saving medical Bio-Printing research, he accepts an offer of investment from a shadowy military organisation. In return, he is forced to use his technology to create the ultimate battlefield weapon – a full size Tyrannosaurus Rex. After a horrific accident in which the dinosaur massacres his research team, the scientist shuts down the project. However, his investors demand results and it can only be a matter of time before the deadly T-Rex is unleashed upon the world!