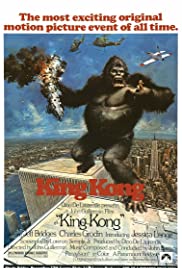 In this remake of the 1933 classic about the giant ape, an oil company expedition disturbs the peace of Kong and brings him back to New York to exploit him. Even though a woman somewhat tames Kong, he finally breaks loose and terrorizes the city, and as the military attempt to stop him, he falls to his death from the top of the World Trade Center.