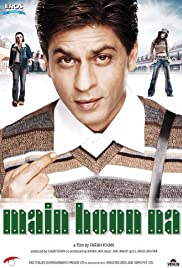 An army major goes undercover as a college student. His mission is both professional and personal: to protect his general’s daughter from a radical militant, and to find his estranged half-brother.