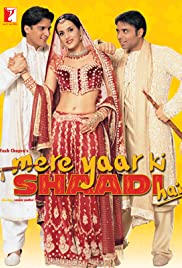 Sanjay and Anjali are childhood chums . When Sanjay’s roommate Ria questions him whether he has fallen for Anjali he vehemently denies . But the truth that he indeed loves her hits him like a ton of bricks when Sanjana calls him to tell that she is getting married to Rohit. Sanjay wants to win Anjali’s heart at any cost and sets off on his “noble” cause of stopping the marriage.