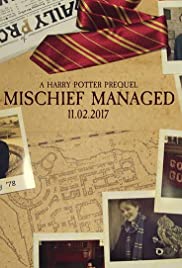 Moony, Wormtail, Padfoot and Prongs are proud to present (and star in)… MISCHIEF MANAGED, a short film about Lily, Snape and the Marauders, set on Valentine’s Day 1978, during their 7th year at Hogwarts. The film was created by a team of Oxford students and shot on location at the University of Oxford in March 2016. After a 6-day shoot and a mammoth post-production, we’re super happy to be able to show you the final result of our hard work. Let us know what you think in the comments!