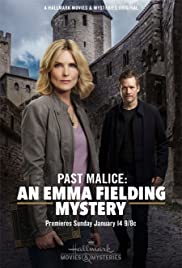 Archaeologist Emma Fielding is hired to consult on the acquisition of a castle-like estate that local legend states is cursed. But she finds herself in the middle of a murder case after discovering the body of the archaeologist she was hired to shadow in a secret chamber in the bowels of the huge building. Assisted by her friend, FBI special agent Jim Conner, Fielding must sift through clues and a long list of suspects, each of whom has their own reason for wanting the man dead, to determine who is the killer.