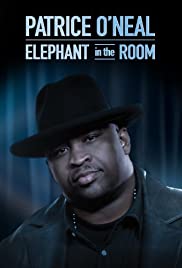 Patrice O’Neal is one of the funniest, most respected comedians working today. You know him from his recurring roles on The Office and Arrested Development, as host of VH1’s Web Junk 20, as a featured guest on Tough Crowd With Colin Quinn. He also has a hugely-followed podcast and sells out shows across the country. ‘Elephant In The Room,’ stand-up performance filmed at the New York Comedy Festival, is his first full-length special and is being release extended and uncensored with 40 minutes of content not seen on TV.