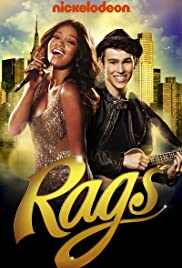 Rags follows the story of Charlie Prince, an orphan living with his acerbic and unloving stepfather and spoiled, simple-minded stepbrothers. Charlie’s dream is to be a singer, and while he is vocally talented and can write music, he can’t seem to catch a break. Kadee Worth, on the other hand, is the daughter of music mogul Reginald Worth and is an international pop phenomenon. While the world knows her as a glamorous superstar, she is secretly frustrated with singing other people’s songs and wearing clothes other people choose for her. Kadee wants the world to hear and see her true talent. Despite every obstacle that gets thrown in their way, once Charlie and Kadee find one another, they each finally get what they have been looking for – a voice, a stage, an audience and each other.