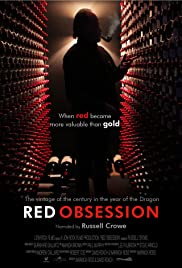 France’s Bordeaux region has long commanded respect for its coveted wine, but shifts in the global marketplace mean that a new, voracious consumer base in China is buying up this finite product. Bordeaux both struggles with and courts the spike in demand, sending prices skyrocketing. Narrated by Russell Crowe, Red Obsession is a fascinating look at our changing international economy and how an obsession in Shanghai affects the most illustrious vineyards in France.