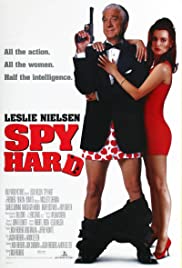 The evil Gen. Rancor has his sights set on world domination, and only one man can stop him: Dick Steele, also known as Agent WD-40. Rancor needs to obtain a computer circuit for the missile that he is planning to fire, so Steele teams up with Veronique Ukrinsky, a KGB agent whose father designed the chip. Together they try to locate the evil mastermind’s headquarters, where Veronique’s father and several other hostages are being held.