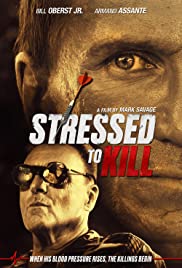 After suffering a heart attack, Bill (Bill Oberst) takes his doctor’s advice literally to eliminate the stresses from his life. The plan is working until his killings attract the attention of a psychotic cop (Armand Assante) who isn’t sure whether he wants to arrest or join him. Complications deepen when it becomes apparent to Bill that the biggest cause of stress in his life might be his wife.