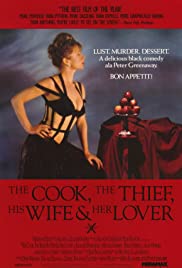 The wife of a barbaric crime boss engages in a secretive romance with a gentle bookseller between meals at her husband’s restaurant. Food, colour coding, sex, murder, torture and cannibalism are the exotic fare in this beautifully filmed but brutally uncompromising modern fable which has been interpreted as an allegory for Thatcherism.

Watch The Cook, the Thief, His Wife & Her Lover