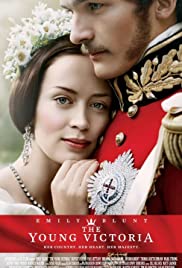 From Academy Award® winners Graham King and Martin Scorsese, along with the makers of Gosford Park and The Departed, comes the story of Queen Victoria’s early rise to power. From an object of a royal power-struggle to her romantic courtship and legendary marriage to Prince Albert, Emily Blunt (The Devil Wears Prada) gives a stunning performance as the young Victoria. Packed with drama, romance, breath-taking cinematography, lavish costumes and featuring an outstanding British cast including Jim Broadbent, Harriet Walter, Mark Strong, Paul Bettany, Miranda Richardson, and Rupert Friend, The Young Victoria has captivated British audiences, and is the film that Company magazine called “an epic British film, which will sweep you up in her remarkable story.”