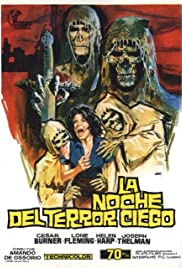 In the thirteenth century, the region around the city of Berzano was ruled by a legion of Templar Knights, who sought eternal life through the ingestion of human blood. They terrorized the region by harvesting the land and committing human sacrifices. They eventually got imprisoned and executed, left hung out for the crows to peck out their eyes. In modern day Portugal, a group of people visits the abandoned city, which awakens the Templar’s corpses, terrorizing the region again.

Watch Tombs of the Blind Dead