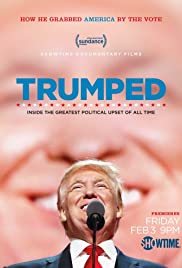 In a behind-the-scenes look at the biggest political upset in recent history, Mark Halperin, John Heilemann and Mark McKinnon offer unprecedented access and never-before-seen footage of candidate Trump, from the primaries through the debates to the dawning realization that the controversial businessman will become the 45th President of the United States.

Watch Trumped: Inside the Greatest Political Upset of All Time