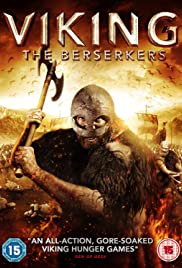 The Hunger Games heads back to the Dark Ages when a group of five young Saxons is captured by a clan of fearsome Viking warriors and used as prey in a ritualistic manhunt. High on a potion that turns them “berserk” the brutal hunters are soon on the scent of the terrified youngsters in a desperate battle for survival from the ritualistic manhunt. Written and directed by Welsh film-maker Antony Smith.