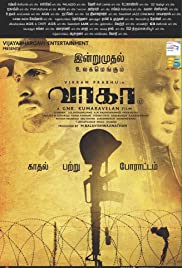 A BSF jawan is held captive in an illegal camp run by Pakistani soldiers. Will he be able to rescue his girlfriend and return to his homeland?